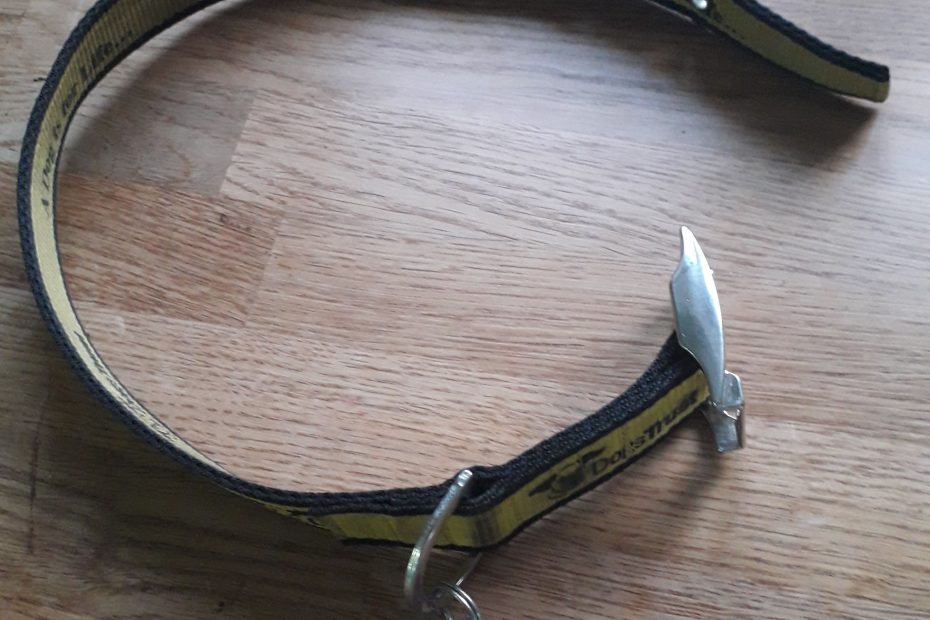 Robyn and Tim left me on my own in the house today.  As they went out Robyn said something about being back in an hour…  What’s an hour?   I had no idea when they would be back, but they left me with some toys – one of which I found had food hidden inside it! – and all my things were here and the smells and things here are more familiar now.  Also, they’ve been in and out of the house regularly since I moved here and so far they’ve always come back, so I settled down to wait…

Still, it was wonderful when they came back and I gave them a warm welcome.  I felt they were happy to see me too, though they didn’t make a fuss so it was all quite low key.  This felt a bit strange at first but then I realised that it was quite nice coz it helped me to feel really calm.

Then Robyn said she had some good news and she produced a small, pink metal circle.  She explained that it meant that I am now part of their family!  She told me that she’d thought I was special from the very first time she’d seen my photo and that actually she’d been sending me love and the invitation to connect even before we’d met face-to-face.

So that was why she felt so familiar on our first meeting, and why I felt strangely drawn to trusting her back at the Centre!

And now they’re saying that I have a home here, if I want it and if I’m happy to stay!  I can barely believe it!

But it seems that, despite all my worrying, and the times when it’s made me feel defensive or overwhelmed, they still want me!

It feels like there’s been a further shift.  I said earlier that I felt different almost as soon as I arrived here – to be away from the other dogs and the noise and activity of the Centre to somewhere with only 2 people and so much wonderful space to run around in and things to explore has been amazing!

But now, to start to feel accepted and wanted – a sense of belonging – seems to have loosened something inside me.  I wouldn’t say that I’ve stopped being anxious as such, but maybe that I’m starting to see all the good things around me and to feel that they might hang around for a while and that I can breathe out and let go of some of the fear and worry…

So, let me introduce myself again: my name is Inca, Inca Harris!