Getting to know this new space 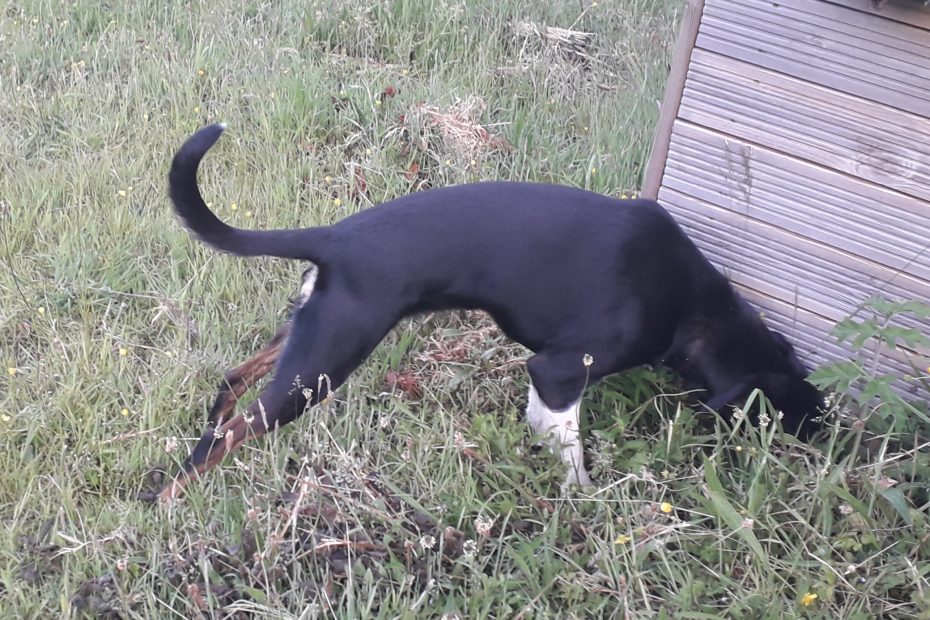 Thursday was another day of getting to know the routines here in this new place.  Again we went up to the fields to feed the big 4-leggeds.  (I’ve learnt that they’re called ‘horses’ and that the girl is called ‘Rika and the boy is Dax.)  I had a lovely run around in the field, and got to explore more of the scent trails.

The woman – I’ve discovered that her name is Robyn – spent much of the day working in one of the buildings and I checked in on her from time to time, just to reassure myself that she was still there and that all was well.

The man – his name is Tim – spent a lot of time playing with me.  He has lots of great games, throwing a ball for me, playing ‘tug’ with a piece of colourful, knotted rope, and giving me belly rubs!

So, as I was saying at the beginning of my story, sometimes we can take things so seriously and worry about how things are going to turn out, particularly if we’ve had experiences in the past which have made it difficult to trust. But it seems that sometimes things can actually work out ok! I never in my wildest dreams thought that I might find myself in a place like this! So much space, so much to see and so many places and smells to explore!

The hoomans seem nice too. They play with me and give me walks and good food. Before I was worried that they might not understand me, or give me the space I needed, but I think we’re slowly learning more about each other and how we can communicate our needs.

I was also worried about doing the wrong things and maybe they would get angry with me, but so far they just keep telling me that I’m such a good girl and that I’m doing really well!

It’s true that it all still gets a bit overwhelming at times but I’ve found that I can go outside into the garden, or into the crate that came with me from my first home, or even go upstairs where I can be completely alone, to sleep and process all of the huge changes of the last few days – I can’t believe it hasn’t even been a week yet since I arrived here! One week in which my life has changed completely! It’s such a lot to take in, but I’m really hoping that I can get to stay here now. I don’t want any more changes! I want things to stay the same, at least for a while. Also, I have to say, I like this place and it would be nice to live here and for it to be my forever home!