LEARNING TO ‘BEND’ SO THAT I DON’T BREAK! 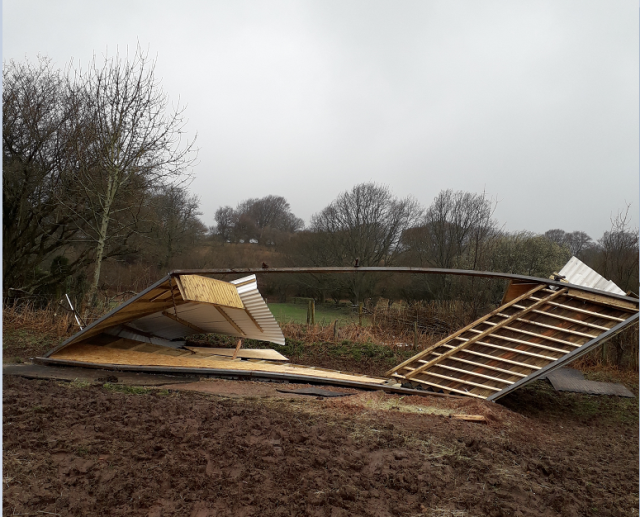 I’ve started to write this blog in my head so many times but not yet had the opportunity to ‘put pen to paper’ – or as I do more often these days, put fingertips to keys!

Each inner draft has seen the content shift and change, reflecting my sense that everything around me is shifting and changing as we move from winter into spring.

This has been very evident in the weather that we’ve been experiencing this month.

The weekend of the 15th / 16th saw further storms with very strong winds.  Sadly, after all the hard work and care that my wonderful husband put into repairing our field shelter, when the previous storm had put it on its roof, this time the wind took it, twisted it and ripped it apart beyond repair:

The very next day the sun came out and it hasn’t stopped shining since!  We’ve had some truly glorious days and as the external storms have subsided, it has allowed some of the inner unsettled feelings to calm.

One of the factors contributing to my inner turmoil was the fact that my non-horsey husband and Dax had a serious clash, resulting in Tim saying that the horse had to go.

Tim is nervous around these big animals and Dax, being a typical hand-reared horse, has little sense of boundaries.  When he comes too close, Tim gets nervous and Dax, being a sensitive animal, picks up on this and gets anxious in return.  Sadly, his response to this is to get defensive, which in his case means threatening with teeth.  Tim tried to reinforce his space by pushing Dax away, but Dax is a horse who just pushes back.  This, understandably, left Tim feeling very vulnerable and afraid for his safety.

I’ve actually found that Dax responds better when the energies around him are kept calm.  If he starts to get a bit over excited, the best way to deal with it is to distract him and to walk away, to give him the space to feel safe again and to calm himself.  This can be challenging though when faced with an apparently very angry horse!

The need to rehome this beautiful boy, who I had hoped would be with us for the rest of his life, and who has taken a huge part of my heart, has hit me hard.

Unfortunately, his owner is not in a position to take him back and so I’ve been trying to find him a good and understanding home, as otherwise he will have to be put to sleep.  However, I’m finding that this is far from an easy task when the horse in question is a non-ridden 8-year-old gelding with some behavioural issues.  I’ve found it a very depressing and frustrating process as everyone I’ve approached has said that they can’t take him, but Tim is pressing for him to go.

But life goes on, even when sometimes it feels like it’s falling apart, and this wonderful place, with its amazing energy, has been working its healing magic on me.

On Thursday I went to a networking meeting in Monmouth where Patricia Carswell spoke of her journey from working as a barrister in London, through burnout and recovery to recreating herself as a freelance journalist and top-class rower.  She was then diagnosed with an aggressive form of breast cancer but following surgery and chemotherapy, is back and looking amazing.

Listening to her speak, helped to crystallise some thoughts that have been running around in my head and I thought I’d share them here.

I’m coming to see, with much greater clarity, the value of flexibility.  For many years I was someone who could have been described as a ‘control freak’.  I liked to feel that I had a handle on each situation, and I needed to know where things were going and what was going to happen next.  I definitely didn’t like to feel out of control!

I thought that being ‘in control’ would be less stressful and give me a greater sense of security.  However, particularly since moving here, I’ve realised that any sense of ‘control’ I had was just an illusion!  Also, that trying to hold on to that control was more stressful and left me feeling more overwhelmed and exhausted.  It must have been very difficult for those around me too!

I’m now coming to appreciate the value of being able to ‘bend’ and ‘flow’ rather than clinging rigidly to the things that I think will keep me safe.  As Confucius said:

It’s funny that I’ve ‘known’ these things for a while in my head, even believed them, but it’s as my wonderful boss from my first job used to say: ‘It’s not until it makes that 10-inch drop from your head to your heart that you really know it’.

I’d like to close with a quote that Patricia Carswell used at the end of her presentation as I thought it was very poignant and ‘on point’: