So, You’re A Horse Whisperer Then 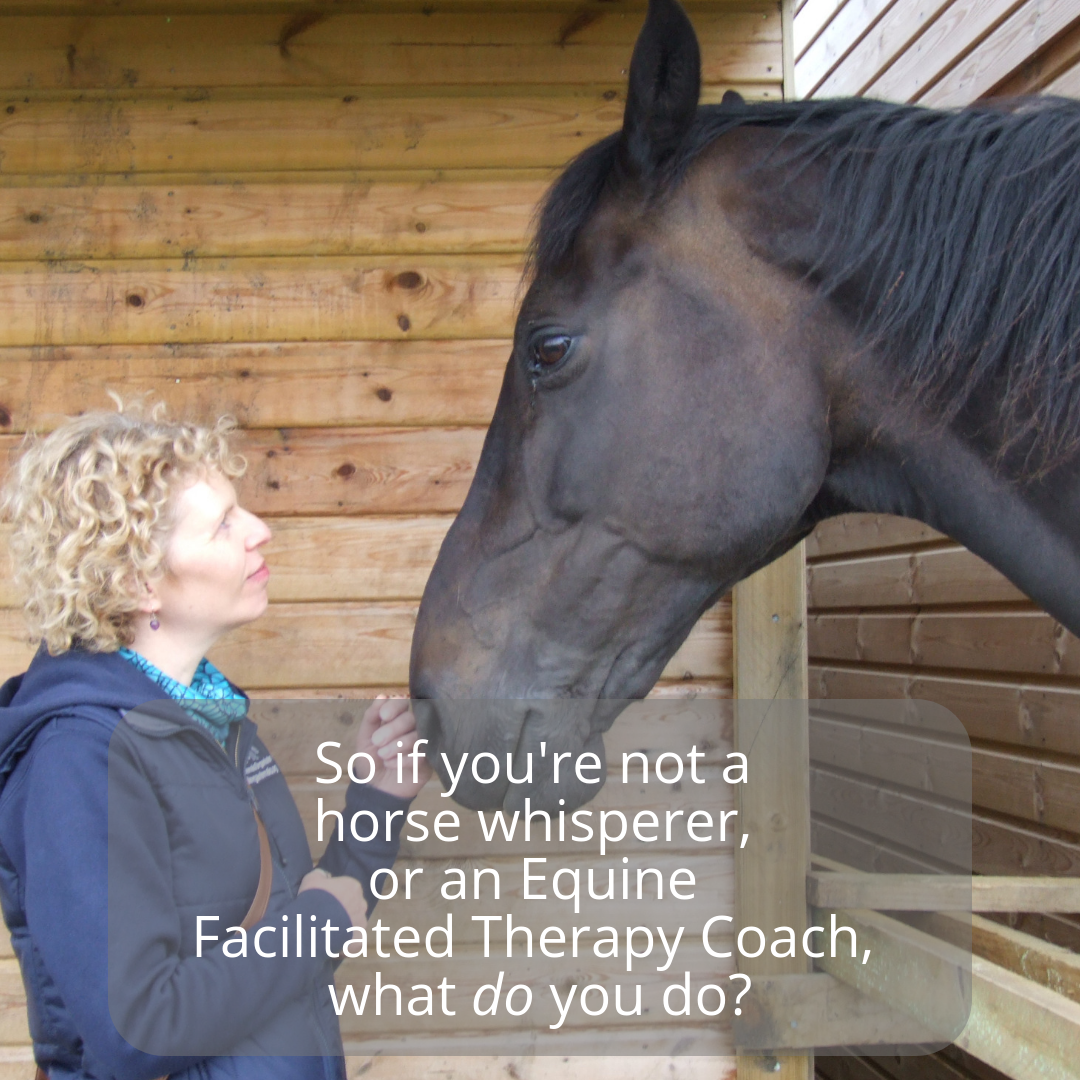 CLARIFYING SOME MISCONCEPTIONS ABOUT THE WORK THAT I DO

Often, when people hear what I do, I get asked this question, but for me it’s not so much about whispering, it’s about listening.

Another misconception is that I offer Equine Facilitated Therapy.  This isn’t strictly true either, at least not in the traditional sense.

So, I thought that it might be a good idea to explain a little more about my work, or at least a part of it.  In this post, I’m going to look at one of my favourite aspects – where the horses and people come together.

My aim is that this should be a mutually beneficial experience, that is, that both the horses and the people should be supported by their time together.

I often see animals used in therapy or assistance roles and I wonder what, if anything, they get from this.  Sometimes they have a particular role to play, a ‘job’ if you will, for example a guide dog, and they provide a much-valued service, but when do they get something back?  Guide dogs, I know, are well looked after and they’re given regular health checks, but their role can be stressful at times.

Things are shifting and there are many programmes out there now that are seeking to come from a more heart-centred and animal-led perspective.  Wouldn’t it be wonderful if all assistance and therapy animals were given more support in their roles?  This could be offered in the form of massages, Reiki and self-selection sessions, for example, just like we might take a ‘spa-day’ if we’ve had a tough few weeks at work.

I used to volunteer with a group who gave horse riding lessons for people with disabilities.  This offered many benefits to the riders, but the horses were often stressed, which came out in ‘unwanted’ behaviours.  Some of these horses had to be retired as they were no longer suitable for the role.  I struggled with this and wanted to find a different approach, one where both parties felt better after their sessions.

So here at Equenergy I’m exploring a different way.

If you’ve been following my posts, you’ll know that we have 2 horses living here.  Both have had challenging experiences in the past.  Dakota (Dax) was taken from his mother at 1 month of age and left to starve.  When he was rescued, he was riddled with worms and had to have extensive veterinary support.  Thankfully he is now a very healthy 8-year-old, however his tough start in life has left him with some emotional issues.

‘Rika was a brood mare for many years.  She was used for breeding and all of her foals were taken from her to be sold on.  When she didn’t conceive after being put with a stallion, they decided that she was no longer of any use and put her out for the meat wagon.  She is the most beautiful, gentle soul you could ever hope to meet, but she was considered ‘worthless’ if she couldn’t produce any more foals.

These 2 beautiful animals support me in my work, and I want this to be something that benefits them too and supports them in becoming happier and healthier individuals.

I believe that for anyone to offer a therapeutic space for another, they should have the space and opportunity to have that support for themselves.  As a therapist and coach myself, I need to have worked – and be continuing to work – on my own issues in order to be able to hold a healing space for others.  I think this is also true for animals who are involved in this field.

All of us are still ‘works in progress’ and there is much to be gained by travelling the healing path together. Take, for example, the programmes in America where offenders are paired with rescued dogs or horses and together they learn how to create a healthier, more balanced life for themselves.

I’d love to see more opportunities for mutual learning, creation and growth of this kind.  We might not have the perfect answers yet, but with time and an open, curious mindset, hopefully we will find a way to walk alongside our animals in ways where they benefit from the partnership as much as we do.

I recently wrote about ‘rewilding’, and I believe strongly that our animals have much to teach us on this subject, too.  But in order for them to be able to do so more fully and authentically, they must be allowed to be as ‘wild’ as possible themselves.  I know that this is a real challenge, on even a small scale, with the resources that most of us have available, but I think that the more we can give healthy freedom to the animals in our care, even when it challenges us, the more we can learn and grow.

So how do I bring people and horses together?

A session with the horses here at Equenergy means that you get to stand just outside the field and start by getting grounded and tuning in to the energy of the place and all the living things around you.  Horses are naturally curious animals so often they soon come over to meet with us and may spend some time in this shared space.

I encourage people to be ‘mindful’, that is, to be fully aware of their surroundings: the sun, breeze or even rain on their skin, the sounds, sights and smells around them.  This helps us to get present, and when we’re fully present it helps us to release anxieties and tensions as these generally relate to memories from the past or worries about the future. 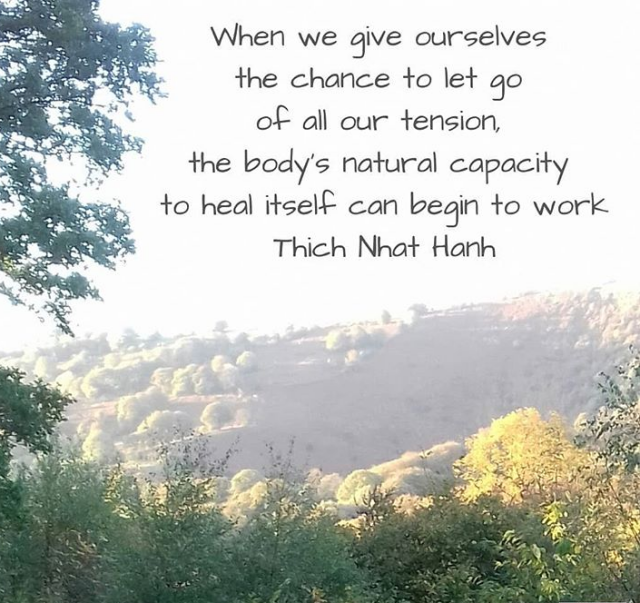 When we can be in this ‘present’ state and hold that energy / vibration, it encourages those around us to enter this same state.  It’s rather like a tuning fork that causes other things to resonate with the same frequency.  Calming our breathing and our heart rate, through getting present, supports others to do the same.  It’s a phenomenon known as ‘entrainment’  and you can read more about it in the work of the HeartMath Institute and Dr Ellen Kaye Gehrke.  Horses are particularly sensitive to this, so when we can enter this state in their presence, it supports their wellbeing as well as our own.  Not only that, but their electromagnetic field is much larger and stronger than ours, so when they enter into this state it strengthens the energy for us – this creates a wonderful healing circle with the energy flowing in and around and bringing benefit to all within the space.

Another aspect of this for the person / people in the session is that I ask them to observe and take note of any feelings and thoughts that are coming up for them.  I might also ask them to see what they can feel from the horses: can they get a sense of their energy? Do they pick up anything when they tune in to either / both of them?  These are things that we can then explore if they would like to work further with me, using a tailored wellbeing package, looking at any issues they wish to address, or objectives that they would like to achieve.

If this is something that would interest you, or you’d like to have a taster session with the horses to see if it resonates with you, I’m happy to have a no-obligation chat.  Just give me a call or drop me a line: